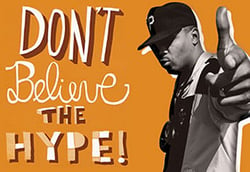 Buzzwords.  #IBOR.  Trends.  Fads  #BigData.  Hype.  #FinTech.  Well, as Chuck D from the seminal hip-hop group Public Enemy once famously rapped, "Don't Believe the Hype"……….at least not prior to performing some good old fashioned due diligence.  I've written on this in the past specific to technology disruption and our industry's glacial pace when it comes to transformation (Technology Disruption); however maybe that's not such a bad thing considering what's at stake if the asset management community takes their eye off the ball and invests in the wrong trends or over-hyped technologies that seem to rear their head every so often.  The buy side is a pretty reactive industry when it comes to technology, which actually makes some sense when you stop and think about the end game and overall objectives of what asset management firms set out to achieve.  In the current market climate, they simply don't have the budgets and open checkbooks when it comes to spending millions of dollars on projects with a debatable ROI.  In this blog, I'll attempt to de-mystify two of these recently hyped concepts and hopefully provide some perspective going forward.

It wasn't long ago that IBOR was the next big thing in our little world of asset management technology and operations.  It was being discussed in every conference; on every blogging site; whitepapers were being produced faster than you could read them.  Everyone had an IBOR solution – OMS applications?  Check.  Investment accounting software?  Sure thing.  Middle office outsourcing providers?  You betcha.  Before you knew it, you had vendors, service providers and yes, consultants, carrying on about all things IBOR, ABOR, MBOR, TBOR, PBOR and I'm probably leaving out a few BOR's; no disrespect.  As I was thinking about this particular topic, I couldn't help but think back to some of the conferences that I attended in the not too distant past; as recently as 2013 and 2014, IBOR had its own workstreams, focus groups and panel discussions at most every gathering in our space.  Now?  I did some research and was struck by the absence of the term in the industry-focused conferences that we would typically attend.  Furthermore, an IBOR Standards Working Group published a standards document (download here - IBOR Requirements Definition) a few short years ago that was ambitious and noteworthy at the time, but now seems to have faded into the background in terms of reach and stature.  I commend the aforementioned working group for taking a shot at defining what an IBOR could or should be, but I contend that much of the IBOR hype of the recent past was a consultant and vendor-led errand.  For arguments sake (I'm not subscribing to a singular definition), let's say that IBOR is the capture and maintenance of all positions and transactions across all asset types in a real-time manner.  It is not difficult to understand why this would be a boon for the asset management community – the front office would be working from a dynamic set of accurate positions and cash, with real-time views of executed trades, exposures and analytics across the portfolio.  Sounds fantastic, I'm sure you would agree.  But at what cost?  Quite frankly, the front office isn't even the group that is signing off on these so-called IBOR projects………it's the middle and back office.  If you've gotten this far, you are probably a follower of this space, so quickly name an investment manager that has kicked off an "IBOR" project in the last 5 years that had an acceptable and scalable solution in place for their middle office.  I certainly cannot, and Citisoft has been and is currently involved with countless projects that touch on this topic.  The fact is that in almost every case, these projects get the "green light" due to technology obsolescence or the lack of a forward-thinking roadmap from the legacy software provider.  And that is perfectly okay, as these systems are absolutely critical to the ongoing operations in our industry.  However, let's separate the hype from the reality.  IBOR is nothing but a slick buzzword; it's new terminology to describe an age-old cog in the investment management life-cycle.  It's not a new concept nor is it a new solution.

We've all heard about big data.  It's seemingly been talked about forever.  I know that I've personally been asked about it for the last several years – what are your thoughts on how big data will impact our space?  When is big data going to come and truly disrupt asset management technology?  Big data has had an interesting ride of late.   For those of you that take an interest in the Gartner Hype Cycle for Emerging Technologies (Gartner Hype Cycle 2015), big data made some waves recently, when it was dropped from the hype curve for 2015.  It was a rather abrupt ending for big data's ride on the curve, as it never even reached the "Trough of Disillusionment", let alone the "Slope of Enlightenment" or the holy grail – the "Plateau of Productivity".  So what happened?  One way to look at it is that big data was never really an emerging technology at all; rather, it was a massive trend that needed some pragmatism applied to it so that all of those data scientists being parachuted into FinTech's various "innovation labs" had something concrete to work towards.  Big data as a trend hasn't really gone away in our industry – it's just that it's been re-focused into a series of technologies, such as machine learning, advanced analytics, artificial intelligence and sentiment analysis (to name only a few) that show signs of producing a tangible benefit and ROI for the firms investing in this newer wave of "smart data".  I am not a big data, smart data or advanced analytics expert (nor do I play one on TV), but I do feel that I have a keen eye for knowing when to pay attention to disruptive technology in our space.  Simply put, data volumes are exploding; more data has been created in the past two years than in the entire cumulative history of mankind.  It is estimated that in the next 5 years, approximately 1.7 megabytes of data will be created every second for every man, woman or child on the planet Earth.  It is therefore pretty easy to see why financial institutions are investing their time, money and resources into deriving value from that treasure trove of data; putting it to use in a tangible manner gives me hope that big data has finally evolved and arrived, albeit under a series of new pseudonyms.

Due diligence, proper planning and doing one’s homework are all popular themes in the Citisoft blogosphere.  If you break down the topics discussed in this particular entry, and believe in good old fashioned ROI and proving out tangible business benefits, then we are most likely on the same page.  “IBOR” and “big data” projects aren’t really going to go away anytime soon, and that’s okay; just don’t get caught in the hype cycle and think that launching one of these projects is the magic elixir that will cure your asset management technology and operations ills.  There has to be benefit inherent in what you are doing, especially given the ticket price with running projects of this nature.